Hardly anyone remembers the controversial 1970 documentary Chariots of the Gods. The feature hit movie screens with a ton of controversy. The documentary’s subject matter was “way, way out there.” The film attempted to pose the following question seriously: were all the great strides in civilization during antiquity derived by early humans’ first contact with advanced travelers from outer space? Did those humans who came in contact with aliens thousands of years ago assume space travelers were gods?

The documentary Chariots of the Gods revels in sheer absurdity, but the feature came out at the right time. The public was quite willing to spend money on books and movies dealing with the paranormal, Nostradamus, Bigfoot, the Bermuda Triangle, and extraterrestrials in the early 1970s.

And it was based on an equally financially successful book.

The Launch of the Chariots 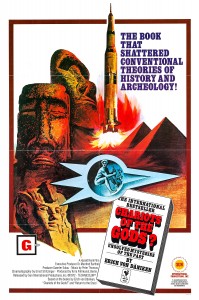 In 1968, Erich von Däniken authored the very strange book Chariots of the Gods? With the work’s publication, the concept of ‘ancient astronauts’ entered the popular culture. The book wasn’t exactly embraced by legitimate scholars of science, technology, world religions, and ancient history. To say scholars were dismissive of von Däniken’s book would be a kind understatement. The public, however, found the subject matter shocking and wanted to learn more. Media hype helped fuel interest in works of speculative ‘mysteries of the unknown.’ Chariots of the Gods? sold millions of copies. Erich von Däniken would release two successful follow-up titles: Gods from Outer Space and The Gods Were Astronauts.

The success of the book combined with the public’s fascination with the ‘aliens from space meet ancient civilizations’ angle led to a small German film company, Terra-Filmkunst, producing a feature-length documentary adaptation.

Check out our book The Missing Screenwriter and learn about the mysterious situation surrounding Robert Hurley!

The documentary film (unwisely) dropped the question mark from the title and released Chariots of the Gods in the spring of 1970. Rod Serling of Twilight Zone fame lent his voice to the narration. He was a perfect choice. In addition to his name value, Serling knew how to ‘sell’ the strange documentary like no one else. Chariots of the Gods centers on an utterly absurd concept. Serling’s voice never treats the material with disdain. He takes the documentary seriously and does his best to make the proceedings somewhat credible. Serling would then go on to narrate the smash-hit Bigfoot/Loch Ness Monster TV documentary Monsters: Mysteries or Myths? for David L. Wolper Productions.

Chariots of the Gods isn’t a great documentary — nor even a very good one. The plodding film employs a great deal of faulty logic when attempting to make the subject matter believable. ‘Experts’ attest to the veracity of the theories presented in the film. Their opinions, however, don’t hold much weight since they can’t put forth any concrete evidence. Hard evidence isn’t anywhere to be found in the feature.

An anecdotal theory tries to lend credibility to the entire film. In the 1940s, soldiers from World War Two landed aircrafts on a South Pacific island. The indigenous peoples of the island had never seen aircrafts or soldiers before. So, they assumed these visitors were gods. 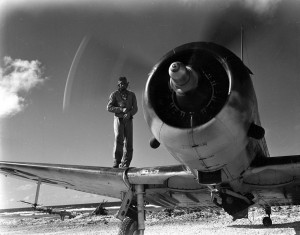 Chariots of the Gods attempts to use the WWII scenario to speculate that the same thing occurred many times in history only with ancient astronauts replacing the WWI vets. And these ancient astronauts helped with — or outright created — such things as the pyramids and more.

Poking holes in this theory comes easy. What happened in World War II was an actual event that has nothing to do with speculation about visitors from outer space 3,000 years ago. And why did the space aliens only visit earth during antiquity? If the aliens liked earthlings so much they provided them with technology, architecture, and so many other beneficial things, why didn’t the aliens come back?

Audiences didn’t care about questioning the logic. The selling point of the movie was the notion the Ark of the Covenant in the Bible was a radio transmitter. Aliens — not God — spoke through the Ark. Large swaths of the population found this theory outrageous and appalling. And they responded by going to see the movie.

Chariots of the Gods and Box Office Gold

In 2018, documentaries about Fred Rogers and Ruth Bader Ginsberg drew critical accolades and did well at the box office. Neither film came even remotely close to Chariots of the Gods’ revenue. In 1970 dollars, the film earned roughly $25 million. Adjusted for the rate of inflation, Chariots of the Gods’ box office gross would be the equivalent to more than $160,700,000 today. The huge box office take wasn’t an anomaly. While it is true documentaries generally don’t do well financially, accurate historical records do reveal some incredible success stories. Sunn Classic Pictures released numerous low-budget documentaries in the 1970s. The then based in Utah company’s In Search of Noah’s Ark (1976) earned $55 million at the global box office. Could someone search for VMP Film’s Robert Hurley? Our screenwriter is missing.

From a technical standpoint, low-budget documentaries boasting G-ratings and directed at 2nd run theaters weren’t taken seriously by critics or even the big studios. Sunn Classics often ‘four-walled’ its releases – it rented the theaters for a flat fee and then screened movies at the venue. The studios didn’t jump on the speculative documentary bandwagon leaving these projects to smaller companies.

A Chariot for the History Books 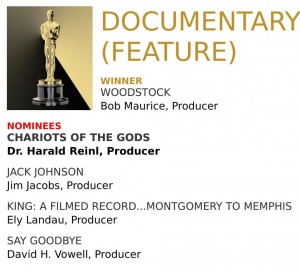 The Academy Award nomination (1970) is a curious one. Chariots of the Gods is not a well-crafted documentary by any standards. The film’s droning narration doesn’t present much passion, and the documentary consists of scene after scene of speculative examples about visitors from space. The Oscar nomination was likely due to the $25 million box office take. In a way, the box office success further adds humorous irony to the film’s nomination. Chariots of the Gods didn’t make big money at art theaters or other high-brow venues. The documentary cleaned up on the drive-in circuit.

Or maybe enough people at the Academy took the subject matter (semi) serious enough to give the feature a nomination for daringness. Regardless of how or why the film received a nomination, it garnered one. Chariots of the Gods holds that distinction in the film history books — but don’t look for too many film tomes to make any mention of the cinematic oddity.

The Soundtrack of the Gods

Even the harshest critics of Chariots of the Gods must admit the soundtrack is terrific. The Peter Thomas Sound Orchestra crafted a fantastic sci-fi instrumental soundtrack with one great selection after the other. The film’s main theme comes off as both trippy and upbeat. Every selection on the soundtrack presents a great 1970s muzak vibe. Instead of Best Documentary Feature, maybe the film deserved a nomination for Best Original Score.

The Great, Forgotten Chariots of the Gods

No one remembers Chariots of the Gods. The documentary only lives on among the fans of weird speculative material that walks the tightrope of science-fiction and science-fact….falling off in the direction of fiction. The film does serve as a fun timepiece of a past era in independent filmmaking and distribution. And Chariots of the Gods still stands as one of the most financially successful documentaries of all-time. That has to count for something. 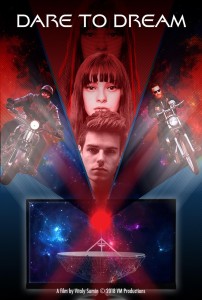 Be sure to visit our websites and learn more about our projects in development including  Dare to Dream –  the inspiring tale about a teenager who uses extra-terrestrial forces with the help of his personal computer to achieve the realization of his dreams.

Want to know more about VM Productions’ activities and about the films we make? Want to participate in our projects? Sign up to get the tickets to the premiere of our movie in post production Dostoyevsky Reimagined-BTS and