Daniel Day-Lewis. Denzel Washington. Viola Davis. Meryl Streep. All these A-list celebrities are magnificent choices for the greatest at their craft in America. Lists plague the internet discussing the greatest of all time. While it is rather arbitrary to name only one person as the best on-screen performer, pondering the idea can be fun. Some may use hardware from awards as their argument, and others may not take that into account at all. No matter one’s opinion, there are countless performers in this country and around the world that captivate audiences with every word and gesture they project. An actor who arguably is the most captivating is none other than Nicolas Cage.

Get all your grievances out now. We are doing this. Yes, Nicolas Cage is amazing. Whether you love him or despise him, everyone can agree that he sure is captivating. His career has seen Oscar nominations and wins, and it also has seen direct to VOD duds. Even those duds produce iconic performances from Francis Ford Coppola’s nephew. Financial troubles brought Nicolas Cage to an interesting point in his career. Where he once was a draw, he became a leading role in films that mostly made their money in certain countries. Nothing is wrong with that at all, but it shows his decline in star power in America.

What may surprise people is that Cage is on the up-and-up once again. Certain films the last few years prove he can still perform at an elite level. Some of these films flew under the radar to casual audiences, but they are critically received well and include an unironically memorable performance from Cage. I may sound like I am living in the past, but there is plenty to look forward to for the almighty Cage. Recently several publications announced Cage will become Joe Exotic in a scripted mini-series based on the hit Netflix docuseries. Earlier this year, a release date was set for The Unbearable Weight of Massive Talent where Cage will play a version of himself where he must channel his previous characters in order to save himself. I mean, what else can I say?

Before diving into his iconic roles, old and new, it is important to analyze Cage’s acting style. It is quite the challenge since attempting to step into Cage’s mind would result in immediate implosion of my own brain, but as he says in The Rock (1996), “I love pressure. I eat it for breakfast.”

Cage often attributes his unique acting style to inspiration from classic art. As a huge fan of German Expressionism, Cage draws from films such as Nosferatu (1922) and The Cabinet of Dr. Caligari (1920). In an episode of GQ’s “Iconic Characters,” Cage even admits Metropolis (1927) giving him motivation for particular scenes in Moonstruck (1987), specifically when he shouts at his own hand. Film is not the only place Cage draws creativity from; he pulls from classic literature. Russian literature holds a special place in Cage’s heart, and in September of 2016, he visited Russia during a publicity tour and noted how he loves Fyodor Dostoevsky. While he believes the true beauty in Dostoevsky work gets lost in translation, he cites Brothers Karamazov as an influential piece of literature partially thanks to its protagonist. His compassion for the character is overwhelming, and it is no secret that Cage takes his most iconic roles because of tremendous compassion for the character. 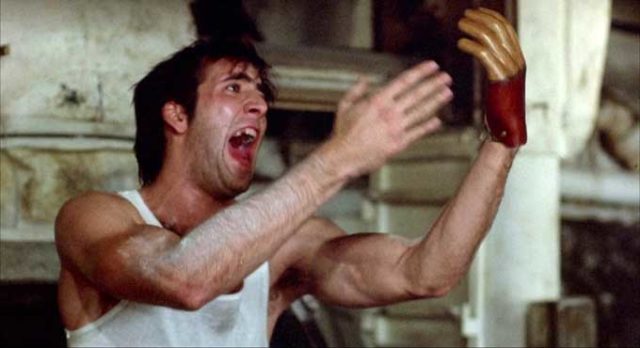 Cage’s sole Oscar win came from his performance in Leaving Las Vegas (1995). The film follows Cage’s character Ben Sanderson, a recently fired screenwriter who drives to Las Vegas to drink himself to death. Upon arrival, he meets prostitute Sera and after $500 spent on simply talking, they form a unique friendship where they agree to not judge nor stop the other from their goals. Not long after though, their relationship deepens, and they struggle to watch each other fall farther and farther.

Dostoevsky’s novels often analyze alcoholism as the crippling vice it is. While his novels often critique its unfair pervasiveness in the lower class, Dostoevsky still reminds readers how tragic its outcomes can be. Remembering Dostoevsky and alcoholism brings further intrigue into Cage’s performance in Leaving Las Vegas. It is safe to assume that Cage’s love for Russian literature may have inspired him to perform in such a risky film. His acting in the film is a wonderful example of his unique acting style.

The plot is a depressing one, but his lively dialogue and gestures have a weirdly humorous feel to it at times. Whether it is his incoherent yet poetic dialogue, or his alarming shivering in bed, Cage balances that absurd and depressingly genuine behavior. By the end, the realism and absurdity in his performance blurs together to make the audience utterly gutted by his actions. Oftentimes in the modern era of film, actors are praised for their realism. Specifically in Leaving Las Vegas, Cage concocted a recipe of realism and absurdity that leaves audiences pessimistic, optimistic, grateful, and regretful all at once. 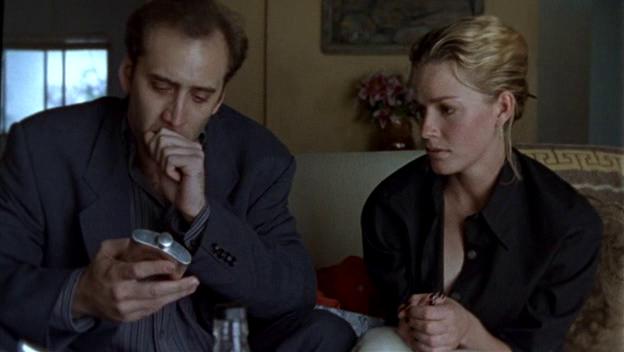 After great success in Hong Kong, director John Woo brought his talent to America. One of his earlier American films is the legendary Face/Off (1997). The film follows an FBI agent who gets a facial transplant to assume the identity of the criminal who killed his son. When the criminal wakes up early though, he takes the agent’s face and tries to further ruin his life. A little confusing? Yes, but when you watch the film, it will all make perfect sense.

Cage deserves some serious recognition for such a unique role. To sum it up, he does an impression of someone doing an impression of himself. Daniel Day-Lewis could never. What he can play Abraham Lincoln? Cool. Since Cage is a big fan of foreign art, German Expressionism played a significant part in how he approached his character in Face/Off. Extraordinary faces and body movements consumed his performance. Not only an homage to his love for art, but the decision makes sense for his character because he slowly loses sanity.

Years of hit performances from Cage are apparent in his filmography, but since his reputation turned into an internet meme, we will jump to his more recent roles that prove his credibility should never be tarnished. Mom and Dad (2017) opens as any other stereotypical vanilla, middle class family, but soon all parents go on a rampage killing their own children. Cage and Selma Blair play the main family’s parents, and they stop at nothing to decimate their own creations. The film is a violent and hilarious beauty. Not only does it satirize the monotonous lifestyle many Americans partake in, but it illustrates the demented reality that at some points, parents would like to kill their children. While the film leaves some ends opened, it ultimately does not matter. The final line echoes the sentiment of the whole movie, and the ending needs no explanation.

If there ever was a role made for Nicolas Cage, it is in Mom and Dad. Glorious Cage perfectly executes the seemingly innocent antics with his children before the inciting incident. When the parents are still normal, Cage makes certain facial expressions that hilariously hint at the inevitable. The dialogue written for him early on has the same affect. First, he recites the lines like any other generic family film, but as the scenes creep closer to the plot’s kickoff, he becomes more ambiguous. His demented actions throughout the film are part of a masterpiece. His over-the-top screaming, his jerky and violent speed, and his comedic timing all play an integral part in one of Cage’s funniest performances. Mom and Dad currently streams on Hulu, so do yourself a favor and check out the film that is 28 Days Later (2002) meets Liar Liar (1997). 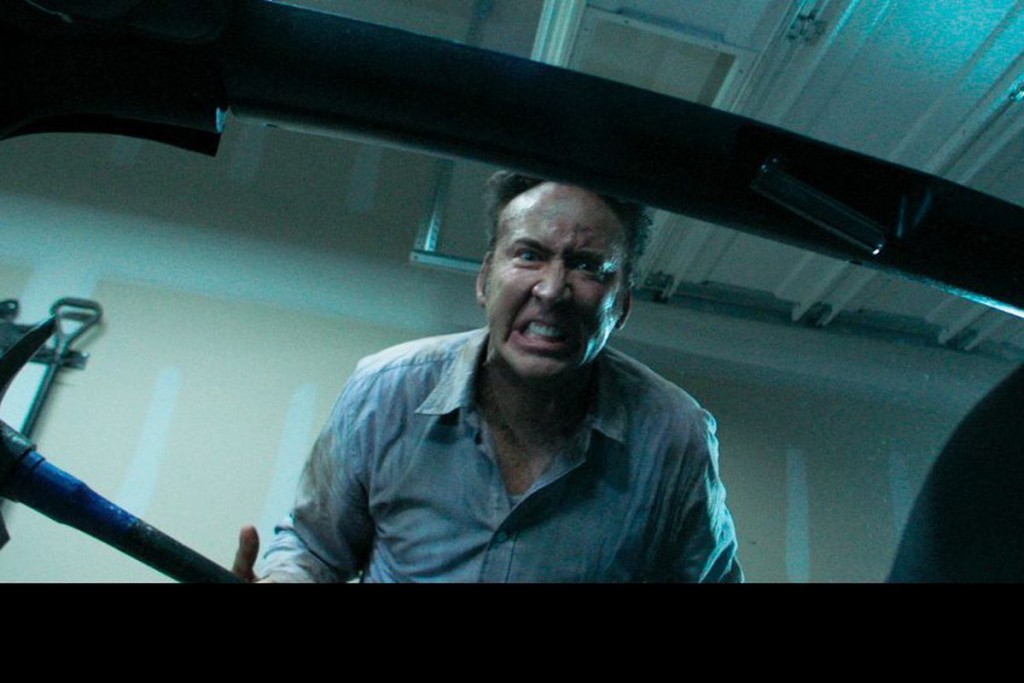 While I can note this film may not be perfect objectively, Mandy (2018) is magnificent, and I obsess over it. Psychedelic cinematography, a beautiful and chaotic score, and of course Nicolas Cage’s performance flow in such bombastic harmony. Mandy follows Cage’s character Red who violently rampages through an LSD-loving cult and their demonic allies in the name of revenge for his love Mandy. As mentioned in a previous blog you can read here, Dostoevsky analyzes revenge in Notes from the Underground. The Underground Man inflicts pain on those who did them wrong rather than seek justice. Mandy perfectly embodies this idea because Red cannot undo what the cult did, but he stops at nothing to hurt them much worse than they did to him.

I could go on and on about this film, but to remain on topic, I will speak briefly on how Cage adds to Mandy. Before tragedy strikes, Cage keeps his performance purposely at ease. He calmly rejects a beer from a coworker, he longingly stares at Mandy in ways that inundate your heart with emotion, and he holds Mandy close to him at all times. Once the unthinkable occurs, it is a roller coaster to say the least.

A scene that stands out is when he is bloody and alone not knowing what to do. Heartbreak slaps the viewer in the face through his motionless body until he barges into his bathroom that is decorated like a Wes Anderson set. A momentary laugh at the absurdity is horribly interrupted when he grabs his alcohol stash and promptly chugs it. Each chug is interrupted by increasingly horrifying screams and cries from Red. Cage’s performance from here until the end becomes unsettling in the best way possible. There is no question Cage feels the pain Red does, and Cage genuinely carries that weight the entire film while embodying the character. A film like you have never seen before, Mandy is something I highly suggest you witness yourself, even though there are plenty of gruesome scenes. 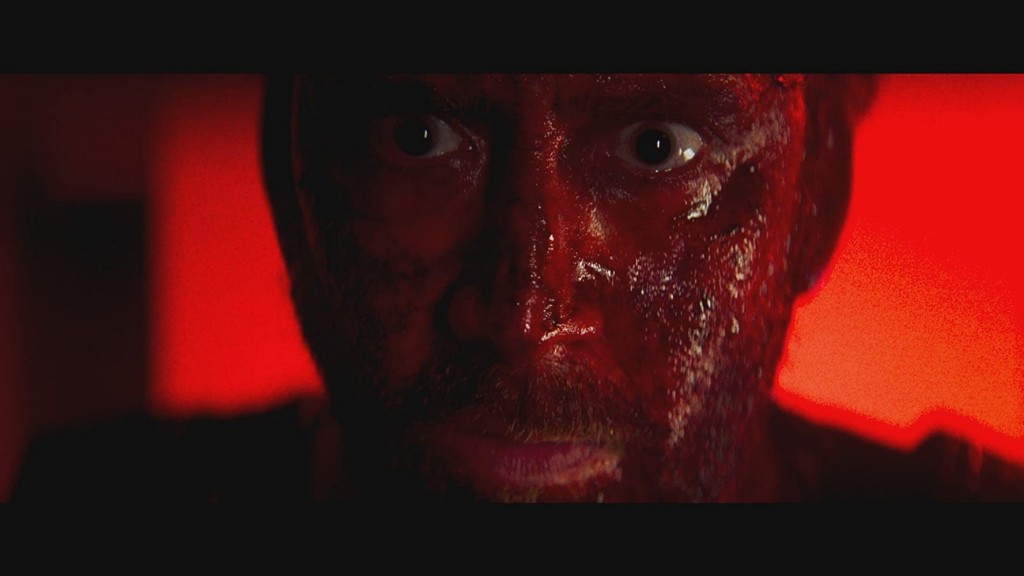 Nicolas Cage is not the only artist that admires foreign art and, specifically, Dostoevsky. Vitaly Sumin tremendously admires Dostoevsky’s work, and he spends wonderful effort adapting the Russian novelist’s work into innovative content. In 2011, Vitaly Sumin released Notes from the New World which is a retelling of Dostoevsky’s Notes from the Underground. Vitaly Sumin’s film takes place in modern Los Angeles where a struggling actor becomes entangled with two lovers and the Russian mafia.

During the production of Notes from the New World, strange events occurred. The original screenwriter, Robert Hurley, disappeared with the only shooting script. Vitaly Sumin and his crew searched Hurley’s apartment only to find signs that Hurley himself may have been involved with cults and the Russian mafia. His eerie similarities to the character in his script reflect Cage’s role in Adaptation. (2002) where Cage’s character unconsciously writes himself into his screenplay. Vitaly Sumin understood the events’ bizarreness, so he documented the events. The new documentary Dostoevsky Reimagined: The Making of Notes from the New World is currently in post-production, and you can stay up to date through content linked below.