“On the fifth day, which was a Sunday, it rained very hard. I like it when it rains hard. It sounds like white noise everywhere, which is like silence but not empty.”
― Mark Haddon, The Curious Incident of the Dog in the Night-Time

The silent films of the early twentieth century, as you know, were not silent at all; orchestras provided live musical accompaniment, often improvised, because, surely, it was unthinkable to share an actual silent film? Was it so difficult to record a live soundtrack? Well, yes, it was. Filmmakers had not yet managed to obtain good quality sound recordings, let alone synchronise the sound with the visuals accurately.

Then in 1926, Warner Bothers introduced a new system, the Vitaphone, to bring synchronized sound to their film, Don Juan, followed (more famously) by The Jazz Singer in 1927. And so the first ‘talkies’ were produced, and nothing would ever be the same again; films became filled with dialogue, music and sound effects. During the silent film era, it was considered acceptable to talk while the film played; audience members exchanged views, forging a sense of community and unity. As Robert Sklar said in his book, Movie-Made America, “talking audiences for silent pictures became a silent audience for talking pictures”. It is interesting to note that there was substantial resistance to this development at the time. It was felt by some that the inclusion of dialogue and sound effects damaged the aesthetic integrity of the art-form that was film. I have to admit that I’m not at all comfortable with the latest Chinese initiative to allow film viewers to comment on films as they watch them via their phones, the comments then scrolling across the screen. Sounds hellish!

Nowadays, thrillers and action films go hand in hand with an equally thrilling soundtrack, and there is no doubt that film soundtracks can be absolute works of art that intensify the overall effect of the film, but moments of peace and silence are utilised just as effectively to make an impact.
As far as planet-dwelling, living human beings are concerned, complete, perfect silence is unattainable (in a sound-proofed room, you will still hear your own heart beat and blood flow, your breath, your joints, and human stomachs will always gurgle). Absolute silence in film would be undesirable; a moment of total silence might appear to announce a technical breakdown. Silences, or perhaps I should say ‘near silences’, in film are given texture through the retention of ambient sounds; these almost imperceptible background noises serve to improve the viewer’s perception of silence. The art of adding or enhancing these ambient sounds to film is called Foley, after Jack Foley, who worked for Universal Studios from 1919 until his death in 1967; he was instrumental in bringing sound to the ‘talkies’. 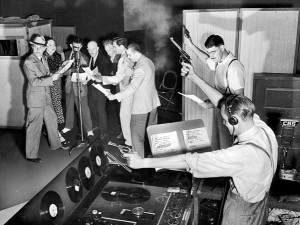 The use of silence in film has been thoroughly explored and is very well documented. Moments of near silence in films such as Saving Private Ryan, Raging Bull, 2001-A Space Odyssey, The Pianist and The Hurt Locker, to name but a few, snatch the viewer’s breath away, freeze you in time, demand your attention, make you FEEL, pull you directly into the film… As you might imagine, with the inherent freedom to experiment creatively, there are many indie films that boldly explore the use of sound and silence. Hush is a Netflix indie film that was made (on a very low budget) about a deaf woman whose cabin in the woods is invaded; her lack of hearing is used to build tension in the film, and the viewer is put on a level of high alert as other senses come into play. Our very own indie film production company, VM Productions, is currently in the post production stage of our latest Dostoyevsky-inspired film, Dostoyevsky Reimagined:The Making of Notes from the New World. The documentary style of this film means that there are many moments of near silence, where incidental sounds become perceptible, adding to the ‘real-life’ effect. Other notable indie films that use sound, or lack of it, to good effect are Elephant (2003), Them (2006), The Blair Witch Project (1999) and Withnail & I (1987).

But I’m not going to go further into that here, fascinating though it is. Maybe another time.

I want to explore the use of those little ambient sounds.

Watching the latest episodes of Twin Peaks, and having recently re-watched Mulholland Drive (yes, I’m a Lynch fan), I realized that the long periods of near silence throughout, gently peppered with little ambient everyday sounds, reminded me of some of the ASMR videos I’ve seen online. I believe that the use of near silence and ambient ASMR-inducing sounds can draw the viewer towards a state of higher consciousness and build a tense sense of anticipation.
I’m sure you know at least a little about ASMR; there is a massive internet community of ‘ASMRtists’ devoted to stimulating the particular pleasures associated with this perceptual phenomenon, but for those of you who are new to this, or didn’t know it had a name, I’m referring to Autonomous Sensory Meridian Response. It is characterized by a pleasurable tingling that begins on the scalp and radiates down your spine and into your limbs, bringing about a sensation of deep calm, or even irresistible sleepiness; this feeling is sometimes referred to as a ‘brain orgasm’. Yes! But don’t make the mistake of thinking ASMR has anything to do with sex. The intensely pleasurable sensations are brought about by various ‘triggers’, including whispering, tapping, scratching, rustling. Triggers can also be visual or tactile, but are frequently associated with sounds.

No-one knows how prevalent ASMR is; until recently, it wasn’t even a thing. For those who experience it, it is commonly familiar from early childhood, where perhaps the soothing whirring of the washing machine, the clipped sound of marbles ticking together, the pleasing clicks of Lego bricks, the sound of soothing voices, the swish of a hair brush, the fragrant, silky yield of Play-doh. Of course, softly sung lullabies are a tried and tested tool to bring about calm and sleep in babies and young children. It’s no accident that these are used in so many horror films…
I remember being sent into ecstasies (no, nothing sexual) during visits to the optician (‘Better like thissss? Or better like thissss?’) as an endless array of lenses were plunked into the futuristic face contraption, and to the hairdresser as I was lulled into a semi-hypnotic state; that sort of close, intimate attention is a common trigger. And I recall my Geography teacher with her potent, low-toned Yorkshire accent tapping the board with a stick, pointing out features on a map; I remember my eyelids becoming impossibly heavy during her lessons, and this may well explain my D grade in the exam. I am still rendered semi-conscious by any lecturer making use of a laser pointer, oh, that slow circling of light on the screen… And watching fusty TV programmes such as Antiques Roadshow; all of that careful handling of delicate, dusty heirlooms, overlaid with knowledge being imparted in awed tones.

I then began to wonder if David Lynch was intentionally incorporating ASMR triggers to bring a new dimension to audience appreciation of his work. We’d have to ask him… but he’s famously reserved about discussing his ‘techniques’. It’s my guess, however, that his understanding of sound in film cares not about labels; he is undoubtedly simply creating a potent aural element to accompany his haunting visuals. One must assume that a good film director/producer instinctively understands human responses at all levels. Well, maybe that’s true. Or maybe Lynch is totally au fait with ASMR and intends to trigger us all. If I meet him, I’ll broach the subject and let you know.

Pre-empting my curiosity, a 2014 survey on www.reddit.com asked its readers what film scenes triggered their ASMR. Here are some of the suggestions:

Inglourious Basterds The apple strudel scene
Django Unchained When the dentist pours the beers
Hook The scene where the boy utters, ‘Oh, there you are Peter’

Is it not possible that all of these scenes were carefully designed to create the soporific trance linked to ASMR? In the burgeoning world of ASMR, unintentional triggers are the holy grail, such as medical training videos, Indian head massage treatments and tailors’ suit fitting sessions. Films nearly fit the bill as being unintentional, certainly when compared with the plethora of very intentional online ASMRtists. Have a look… Google it. It you don’t experience ASMR, you’ll certainly have a good laugh.

Here’s a taster for impatient readers:

I should warn you that there are currently two indie films in production which are specifically promoted as ASMR films: Murmurs and P.A.I.N. If you’re not into ASMR, you may want to avoid them…