Not all teenagers enjoy having to read classic literature at school; I certainly didn’t like having to read Shakespeare’s plays at the age of fourteen. Though I loved Victorian literature, any texts predating the 1800’s seemed totally inaccessible and dated to me. At the time, I couldn’t comprehend why Shakespeare was compulsory in British school curriculum. Now, I marvel at the beauty of Shakespeare’s language and believe he should be read by everyone.

Noticing this change in the way I view Early Modern literature made me question what it would take for both younger generations and those uninterested in classic literature to understand the underlying value of these works. Then I recalled what it was that made me alter my approach to Shakespeare’s plays: watching Baz Luhrmann’s Romeo and Juliet. Luhrmann’s repositioning of the story in a contemporary setting whilst retaining the play’s original language was what made the film breathtaking and inspired me to reread the original play in a new light. 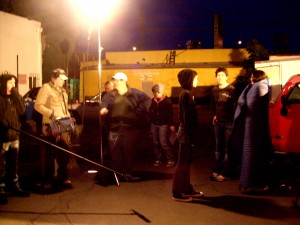 The crew of Notes from the New World assembles for a night shoot.

Works are deemed ‘classic’ because their messages are timeless, providing fantastic material for the medium of cinema. These works have an appeal that outlast their time because they speak to us on an innate level; they will always have relevance to humanity because they address issues that are universal. Though films won’t always capture the same essence of the literature it is inspired by – giving grounds for the skepticism of book purists – often the fact that they bring something fresh to the story is sufficient to make them essential viewing, in my opinion.

Those who maintain one film adaptation is enough, fail to see why they are so essential to our culture. I feel the dissenters of multiple adaptations (for instance, the recent adaptation of Far From the Madding Crowd has been met with cries of, “But the 1967 version was good enough!”) do not realize that the beauty of film adaptations is that no two are alike, even though they draw from the same source material. If Luhrmann had been put off by Franco Zeffirelli’s wonderful adaptation and decided not to make his contemporary retelling of the story, I would not have been as receptive to the original play, and thus the door to the world of Shakespeare would have been shut off from me.

I believe that every text you read changes you for the better in some way. Beyond providing escapism, these texts can introduce you to new perspectives and force you to reconsider the way you view the world, it can give you insights into the past, or take you to places you would never otherwise see. Therefore, in my opinion, having any barriers to classic literature are utterly detrimental to our society. What makes these modern adaptations so fundamental is they have the power to bring the best stories to new generations and provoke them to think and reflect, and (hopefully) to read the original works.

Previous Article To cease thinking, or to not?
Next Article   Henry Palmer and his “Dostoyevsky Reimagined” Vlogs