Home  /  Dostoyevsky Reimagined  /  Rage: The Invasion, The Bat and the Devil.

Breathing out the Anger.

Rage and violence, we all know them, we are all enthralled by them. Since the dawn of man, people have used rage to overcome fear, to power through difficulties and continue onward, we, as a species, are familiar with anger.

It is a defense mechanism to things that impede or otherwise cause us difficulty. While overwhelming anger is frowned upon, those who lace their rage with violence become monsters. But, in today’s world, we see just how violence affects us not only on the silver screen, but also in real life. The Ukraine 2022 invasion by Russia has shown the effects of violence on many people’s lives.

To understand why there is a war, we must look at history to truly understand the current conflict.

After the dissolution of the USSR back in 1991, Ukraine and Russia entered a peace treaty, in which Ukraine agreed to become a non-nuclear weapons state, and any former nuclear weaponry was moved to Russia to be removed and dismantled.  In return, Russia, the UK, and the US would allow Ukraine to remain an independent state. In 2013, however, then President Viktor Yanukovych, had plans to make Ukraine more loyal to Russia. 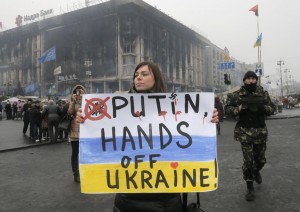 In response, he was removed from office. Valdimir Putin, the current President of Russia, claimed that most Ukrainians wanted closer ties to Russia. Whether or not he was telling the truth is unknown, but it is believed that he saw a possible alliance between the UK, US, and Ukraine as a threat to Russia.

A year later, in 2014, Russia took over the southern Ukrainian territory of Crimea under the pretense that they were ‘helping’ the locals. As a result, 14,000 people died as a result of the fighting.

The Rage of Today.

Fast forward to February 24th, 2022, Russia has invaded Ukraine with the goal of “de-nazifying” the country. In truth, Putin instead wishes to expand Russia’s power as a world leader, and quite possibly seize control of Ukraine’s Nuclear power plants, such as Chernobyl.  Putin ordered what he called a ‘special operation’ that was actually a full-scale invasion of Ukraine. 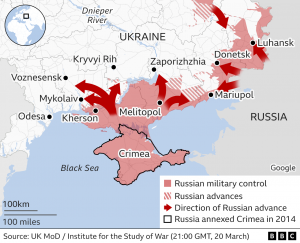 As a result, there has been worldwide outrage against Russia, with multiple economic sanctions and embargos that have taken affect. But the ground effects cannot be understated. Multiple cities have been attacked; civilians have been forced out of their homes. 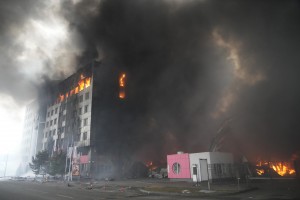 A building burns after shelling in Kyiv, Ukraine, Thursday, March 3, 2022. Russian forces have escalated their attacks on crowded cities in what Ukraine’s leader called a blatant campaign of terror.

It is scenes like this that show that rage can truly hurt people.

The Rage on Screen.

In the modern world of media, rage and violence often go together, hand in hand, in creating stories. Two of the most popular ones that use these concepts are the Daredevil (2015) show, published on Netflix and produced by Marvel Studios, and The Batman (2022) made by DC.

The protagonist of these shows, the titular Daredevil and Batman respectively, are very similar. Both are vigilante crimefighters who employ dark and otherworldly motifs to instill fear into the criminal elements of their cities, and, indeed, both struggle with their inner demons, and their inner rage.

Both have lost their parents at young ages and have gone through various ordeals that resulted in them donning their mantle, the devil for Matt Murdock, and the bat for Bruce Wayne.

They become an urban legend in their cities, known for inflicting brutal wounds upon their foes with nothing but their bare fists and an arsenal of gadgets.

But what truly hallmarks both men as damaged, broken subjects of a system that beat them both down is simple.  They want to just hurt the ‘bad guys.’ In the opening scene of The Batman, a group of criminals go to harass and assault a helpless bystander, and the sounds of screaming are cut off by the sound of heavy footfalls. 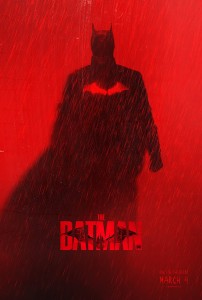 From the darkness, a figure emerges. Dressed in the mantle of a bat and covered from head to toe in armor, the urban myth called The Batman appears. One criminal gets overconfident, and approaches the Batman with a machete in hand, asking snidely “Who the hell are you?” In return, with one hand, the Batman disarms him, and beats him to the ground.

Then keeps beating him with his armored, metal coated hand. The Batman savagely wails on the down beaten criminal with no semblance of grace or mercy. Just barely restrained rage that will leave the criminal lying in a coma from having his face caved in by a metal fist. The other criminals watch on in fear, unable to move or do anything to prevent this rage fueled assault.

Then, the criminal gets an answer to his question.

“I’m vengeance,” the Batman says in a whisper of hate.

Then, he meets the other criminals, and in a shocking display of brutality, battles them all, using a combination of his own fists, plus wrist mounted tasers that leaves one unlucky criminal smoking from the neck.

This is the opening scene of the movie, and it is enthralling to watch. But, at the same time, it sends a message. This is our hero, and he doesn’t want to save the innocent, he wants to beat the bad guys. The outcome might be the same, but the method is different, and thus, the people he’s trying to help fear him more than the criminals.

So that’s one vigilante, what about the other? Matt Murdock, Marvel’s Blind Superhero, has his own anger issues, and he knows this. 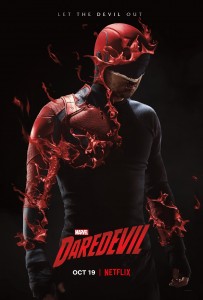 While lacking any overt displays of pure terror, Daredevil showcases his own rage by happily getting into brawls almost every single night. He beats up criminals by slamming his fists into their skulls, repeatedly.

Unlike the previous example, Daredevil is not wearing such heavy armor, and as such, his targets don’t go down even if he gets a good hit in. But even so, there’s a undercurrent of enjoyment in his actions.

Like Bruce, the question is raised if Matt just likes going out into the night and finding criminals to beat the crap out of. He even admits that he: “Needs this.” I.E: Being Daredevil over being Matt Murdock.

And the viewer can understand this. Who doesn’t want to go out, have exciting adventures and be a superhero? The thrill, the dare-devil action, and of course, the chance to have high octane thrill fights.

Also, he’s a lawyer, he’s scary both out and inside the courtroom.

We, as a species, know rage very well, and sadly, we are also very familiar with violence. Pick any media outlet, shows, movies, games, and nine times out of ten, it will have violence. Either as a narrative point, action scenes, or part of the charm.

So, this raises the question, why do we relate to these characters, who adorn black mantles and dye their fists in red?

The answer lies not in the characters themselves, but what they allow the audience to experience and release. Every human being who sees these characters has gone through trouble and frustration, especially in the past three years. Most of us are going to be angry over something, life kicks while we’re down and out.

This gives the audience a form of catharsis by proxy, since most of these scenes are more visceral than most. Every punch, every hateful growl, is displayed in its entirety, so the audience, in turn, feels it.

For a moment, the audience is the one that gets to release all their pent-up frustration and imagine themselves as the Bat or the Devil. And so, they can beat the crap out of someone who absolutely deserves it. A power fantasy, in other words.

And yet, when the violence is over, what does that leave? For the characters on screen, its no real issue, as there’s always more bad guys to beat up, or more people to save. But, in real life, things are much, much more complicated.

Rage in the Real World.

Yet, we still love going to these movies and shows, mostly because of that catharsis.  Because of a strange fasciation with the characters that allows us to expel our own rage. We can relate to them more. This is even more proven today, as Putin’s, quite frankly, barbaric invasion of Ukraine. 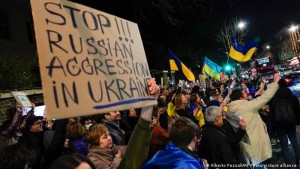 People are outraged at the brutality towards the Ukrainian people. Russia has bombed civilian refugee routes and attacked Chernobyl, one the world’s largest nuclear power plants.

This, in turn, sparks rage and violence across the European theater. Many Ukrainians either signing up for the army to fight for their home. Or expressing their anger on various social media platforms such as Twitter. In addition, this has sparked protests in Russia itself about the war. Many civilians forming large crowds in city streets that are protesting the war.

Why Putin has invaded Ukraine is a complex topic, but for the people on the ground, they see their homes being destroyed, lives taken and ruined. All so a man in power can further his goals. But, as we have seen, rage and violence is best left to the screen. The destruction of Ukraine’s cities and towns have left scars across the European theater, and we see just what much rage leaves behind.

The sad answer is, nothing good. When the rage is gone, all we see is just empty buildings, and destroyed homes.

Rage on the Movie Set.

Frustration is a common occurrence with writing and directing a movie, but in  AN LA STORY: The Making of the award-winning Notes from the New World made by VMP films and directed by Vitaly Sumin. We see the constant trials and tribulations that plagued the movie director Vitaly Sumin.

You have rewrites, reshoots, contacting actors, and cutting pieces of footage out, and salvaging the rest. Not to mention, the stress on set from setbacks.

It’s all a very frustrating process, and yet, Vitaly rises above the need for rage. He maintains his love and passion for the film, even when dealing with setback after setback.

Want to know more about VMP Films‘ Dostoyevsky-Los Angeles Project and about the films we make? Want to participate in our projects? Sign up to get tickets to the premiere of our movie (currently in post production), An LA Story (aka Dostoyevsky Reimagined-BTS) and grab our FREE e-books !

Damon Day has a BA in English, with a Minor in Creative Writing from Washington State University, with certificates in Technical and Professional Writing. He loves to examine characters and movies in depth, and explore what makes us human. 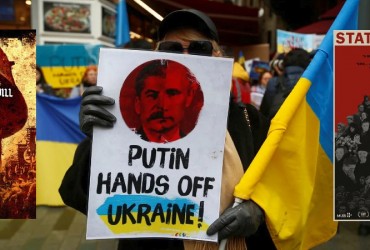 Previous Article Cult of Personality, Propaganda Film, and Russian Invasion of Ukraine: Exploring Putin’s Dictatorship Through State Funeral (2019) and The Triumph of the Will (1934) 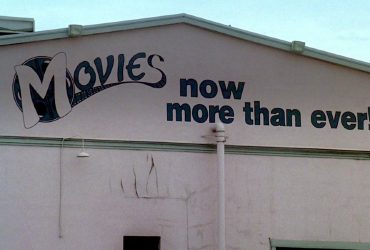