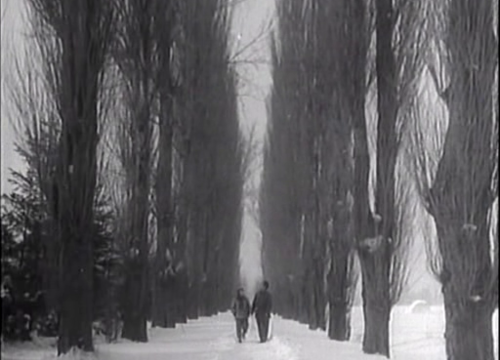 I had a tough writing week; I just couldn’t find anything interesting to write.

I didn’t want to keep hammer you with the same films I have already listed previously. I wanted to write something new, something different in order to keep you glued to your chair.

By the way, have you been able to watch some of those films I suggested you to watch? If the answer is NO, I suggest you to do it soon because it will change your life or at least your way of perceiving cinema.

This week I pushed my films knowledge boundaries by researching Dostoevsky’s films from other countries. I started this research with low hopes of finding something interesting, but I was wrong.

You cannot believe how well known and respected Dostoyevsky is in Asia, especially China.

As it’s critically observed in the book The Russian Hero in the modern Chinese fiction written by Mau-Sang Ng, the writer states, “The fame of Dostoyevsky in China was greatly enhanced by the publication by Geng Jizhi of the Chinese edition of The Brothers Karamazov. This book is the last long novel from the famous Russian writer in the 19th century.”

The Brothers Karamazov is a tragedy about the Karamazovs between father and son. As in his other works, it reflects the sharp conflicts in the reality of Russian society through the profound and penetrating analyses and description of the characters mental activities.

While lying low in Shanghai during the Japanese occupation, Geng Jizhi began to carry out his plan to translate the entire works of the great Russian author

Although his work was interrupted by his death in 1947, Geng Jizhi managed to bring alive in China great Dostoevsky’s books like: The Brother Karamazov (1940), The Possessed (1946), Memories of the house of death (1947), and many more. His manuscript of Crime and Punishment was destroyed by the Japanese in  the occupation days in the early 30’s.

So after I completed this interesting journey in the history of the Chinese culture, I wasn’t surprise to discover Dostoyevsky’s name involved also in Chinese films.

Now in order for you to understand my blog, I need to step back a while and make you aware of what the Chinese film industry is about and then we can go straight in the subject Dostoevsky on film.

A lot of people nowadays consider the Chinese cinema a big sloppy soup full of martial arts and action. Well, sorry to disappoint you guys but it is not like that at all. Chinese cinema comes from a theatre background.

If you are interested in the Chinese theatre culture you need to watch Goodbye My Concubine by Kaige Chan.

Chinese films always struggled to be released, because of the country politics, money, and dictatorships. Many Chinese directors from the sixties and seventies actually risked their lives in order to make their films more controversial and artistic. A good example is Nagisa Oshima’s masterpiece, In the Real of Senses.

That is one of the many examples of the struggle of Chinese filmmaking and I believe it is important to understand those issues in order to appreciate and respect the challenging Akira Kurosawa’s Masterpiece, The Idiot released in 1951 based on a novel written by Fyodor Dostoyevsky. 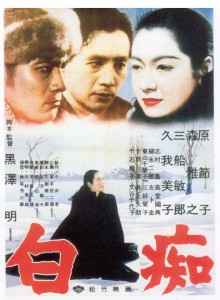 The movie was filmed in black and white and, at the beginning, was intended to be a two-part film with a running time of 265 minutes. The Shochiku Studio, against the director’s will, originally cut most of the good parts of this film. Imagine how hard must be to put Dostoevsky on film, how hard must be to translate a literature book into a language we can all understand.

In an interview Kurosawa said, “Since I was little I’ve liked Russian literature, but I find that I like Dostoevsky the best and had long thought that this book would make a wonderful film. He is still my favorite author, and he is the one — I still think — who writes most honestly about human existence. One of the challenges of my carrier was to put Dostoevsky on film.”

The film tells the story of Kinij Kameda, a man who suffers with epilepsy and his only goal in life is to become a better man in order to help the others. 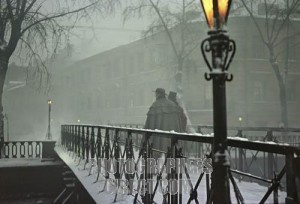 He travels to Hokkaido to visit a family member and there he meets Akama, violent and immoral man whom confess to Kinij his profound love for Taeko Nasu. Akama shows him a picture of her and Kinij recognise that in her eyes there is pain and he becomes obsessed with her.

I don’t want to spoil the ending for you.

Now fellow readers, get up from your chairs, forget about Facebook and YouTube; walk in a DVD store and ask for The Idiot a good DVD store with a knowledgeable staff will know what you talking about, and have a good rest of the week.

For any questions, clarifications, and comments, I am always here for you.