When discussing Dostoevsky’s work, I often refer to Leonid Grossman’s quote in The Poetics of Dostoevsky where he says Dostoevsky wanted “to introduce the extraordinary into the very thick of commonplace, to fuse…the sublime with the grotesque, and push images and phenomena of every day reality to the limits of the fantastic.” What’s more extraordinary than professional wrestling? The sport, entertainment, or whatever one calls it, thrives off putting extravagance within everyday life. Simple stories are told with superheroes and supervillains. What’s more sublime than a shooting star press? What’s more grotesque than a barbed wire bat ripping through someone’s forehead? What’s more Dostoevsky than professional wrestling? 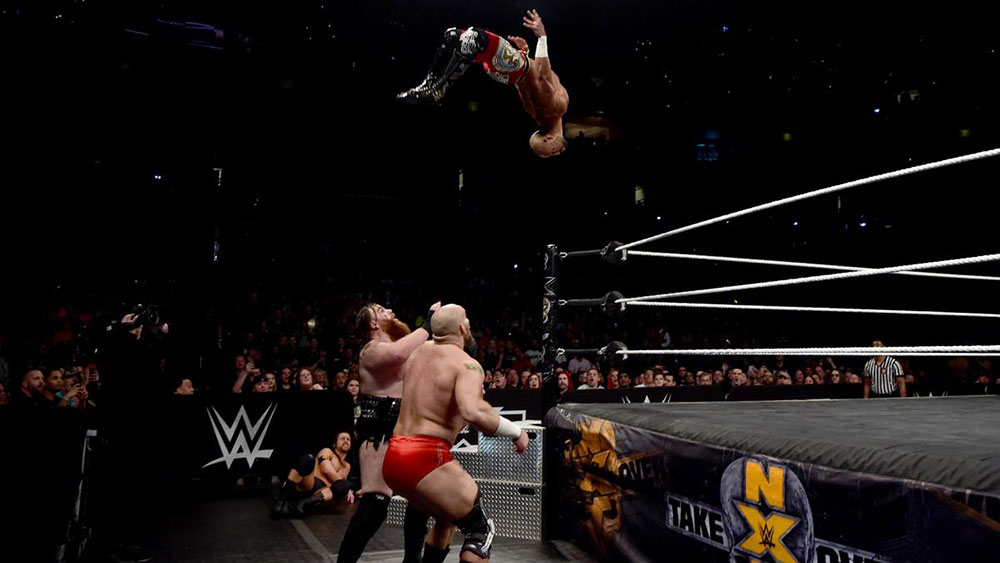 While there are many professional wrestling companies in the world today and throughout history, World Wrestling Entertainment (WWE) is indisputably the most prominent. Wrestling is inherently silly. Some would say it is a soap opera for stunt people. Despite WWE having the highest of highs (selling out football stadiums) and the lowest of lows (record low television ratings for their weekly show), the company reliably offers truly engaging stories that play out in physically marvelous matches. I have personally seen friends tune into an NXT match (WWE’s “third brand” show) with the stereotypical expectation of silliness, and then the athletic performances blow them away.

Wrestlers must be in great physical condition to engage a crowd, but they also need to tell a compelling story to keep crowds hooked. Entertainment is in the company name. They entertain. Week in and week out they tell stories. Some stories are repetitive and boring, but others genuinely captivate audiences. Since the company has been around for decades, it comes as no surprise that WWE’s stories and characters often are modern adaptations of classic literature. 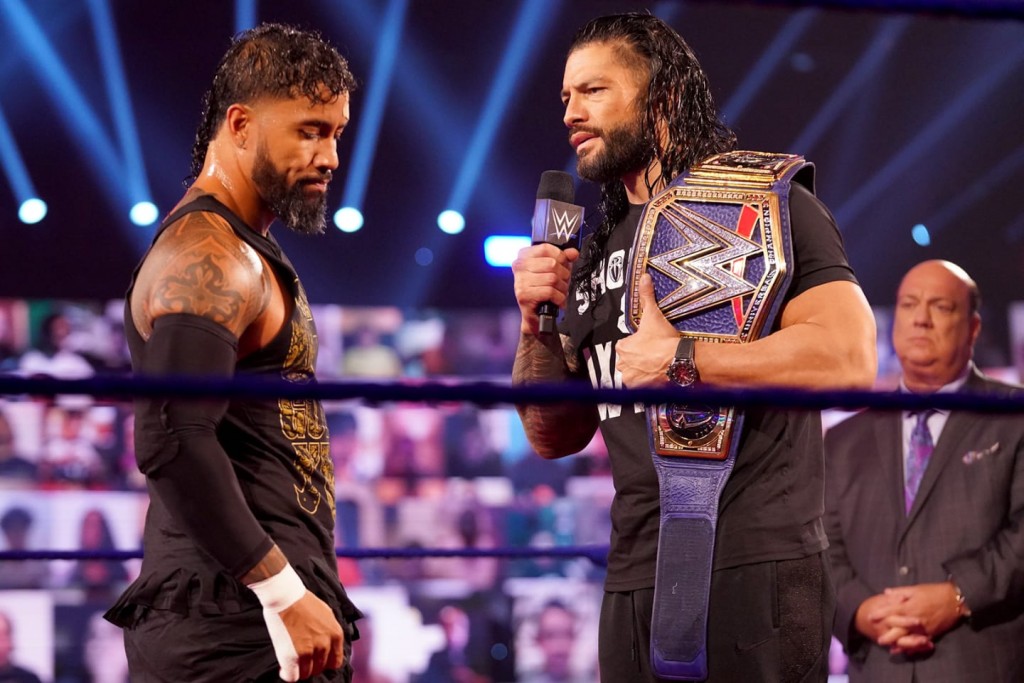 Dostoevsky’s work slides its way into copious entertainment. There are countless modern adaptations of classic literature that has Dostoevsky’s name written all over it. WWE is no exception. In late 2012, a faction of new talent debuted at WWE’s pay-per-view Survivor Series and wreaked havoc on its established starts. The anarchist group became known as The Shield, and it consisted of wrestlers Seth Rollins, Roman Reigns, and Dean Ambrose. For months the group eviscerated everyone in their path. They were the antithesis of WWE the multibillion-dollar corporation. Despite being a monstrous trio, in 2014 Rollins turned on his brethren and sided with The Authority, a group led by, at the time, real-life WWE COO Triple H. Rollins sold out for money and glory by betraying his friends. 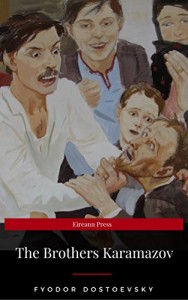 A theme presented in The Brothers Karamazov is forgiveness. One should hope for a criminal or sinner to find redemption rather than punishment. For quite some time, Rollins brought hell to his former friends. By selling out, he later became world champion and let his former Shield members fall beneath him. For years, Ambrose and Reigns despised the traitor. They constantly fought against him either as a team or alone. Fast forward a few more years, and The Shield reunited several more times. In real life, it most likely was to get major revenue from new merchandise, but in storyline, Ambrose and Reigns believed Rollins regretted his decision from 2014. He redeemed himself. They put aside their differences and forgave Rollins. Even though Rollin’s act was despicable, the others knew how to forgive.

Similar to The Brothers Karamazov, Ambrose and Reigns learned they could not simply blame Rollins. Everyone shares responsibility. Before their breakup, WWE teased Ambrose splitting from the faction. Maybe Rollins simply beat him to it. If Reigns received an offer from the company’s COO, maybe he would have taken it as well.

The Road Warrior’s degeneration shouts The Double. Dostoevsky’s novel follows a character who discovers another man identical to him stealing his friends at work. The protagonist slowly slips into madness as his double takes his place. Just like in the novel, Hawk spirals as a new member donning the iconic face paint and shoulder pads wreaks havoc on WWE’s tag team division instead of him. In the novel, the character eventually is sent to an asylum. WWE went a more insensitive route with Hawk climbing the jumbotron with the intention to jump, and while the new Road Warrior member tries saving him, he accidentally pushes Hawk off. The parallels between Dostoevsky’s The Double and WWE’s Road Warrior storyline are apparent, but the wrestling behemoth slightly tarnished arguably the greatest tag team’s reputation.

Dostoevsky’s The Idiot centers around the idea that a moral man cannot succeed in reality. The world revolves around money. If one is not ideal for the world’s standards, they are worthless. One might even refer this to somewhat of an underdog story. In the world of professional wrestling, underdog stories are abundant. Whether wrestling creates blatant modern adaptations of classic literature like David vs. Goliath or if they do it accidentally, it is still clear that classic literature influences modern storytelling. 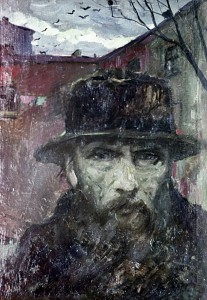 A WWE wrestler that somewhat embodies the ideas in The Idiot is Daniel Bryan. A star in independent promotions, Daniel Bryan arrived in WWE as an underdog. In a company where larger than life personalities receive the best opportunities, Bryan faced immeasurable obstacles. Despite WWE legitimately keeping Bryan low on the card, fan support went through the roof. Everyone wanted to see Daniel Bryan succeed because he embodies professional wrestling, and more people could identify with his look than one of John Cena. When the fans forced the hand of WWE to push Daniel Bryan, they then created a compelling story. After Daniel Bryan won the WWE Championship from poster boy John Cena, Triple H cost Bryan his title saying it was “best for business.” Once again Triple H mixed his real life corporate role with his character to express how his company would earn more money with a different champion.

Bryan’s story had a fulfilling ending though. With fan support that was not seen since the days of The Rock and Stone Cold Steve Austin, Bryan earned a match against Triple H at Wrestlemania 30, and if he won, he would be added to the WWE Championship match later in the night. Bryan won both matches, and Wrestlemania 30 ended with Bryan raising the belt over his head. The ordinary man defied the odds and climbed the improbable mountain to become the unlikely face of WWE.

Notes from the Underground 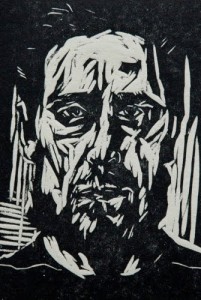 While WWE creates more grounded characters in the modern era like Daniel Bryan, they are not afraid to take a chance on otherworldly characters. The Fiend is a modern adaptation of classic literature. His actions and beliefs mirror Notes from the Underground immensely. In the novel, the protagonist rambles on about how rationalism and utopianism are farces. His bitter outlook on life comes from his idea that the world will become monotonous. Everyone will be the same and lose any sense of free will.

The Fiend embodies these ideas. He is the alter ego of wrestler Bray Wyatt, and The Fiend takes over to terrorize opponents with supernatural and existential warfare. One of the most absurd matches in WWE history perfectly illustrates The Fiend’s similarities to The Underground Man. At Wrestlemania 36, The Fiend faced John Cena in more of a cinematic experience than a wrestling match. The Fiend (and Bray Wyatt) spent the match toying with John Cena by critiquing his career and WWE as a whole. Wyatt criticized how Cena is a corporate made star in the essence of Hulk Hogan. WWE always chases its next Hulk Hogan, and Wyatt/The Fiend acknowledged this. They shattered the fourth wall and stripped Cena of his persona.

After Cena beat a different version of Bray Wyatt years ago, this new version with The Fiend wanted revenge. He already felt first hand the awful affects of WWE wanting monotonous stars. Wyatt was everything but monotonous, and WWE had no faith in him for that. As a result, The Fiend arrived here and spent countless minutes harassing WWE’s golden boy that left for Hollywood. The Fiend is arguably the most compelling character currently, and his chaotic promos and matches are eerily similar to The Underground Man’s rants. 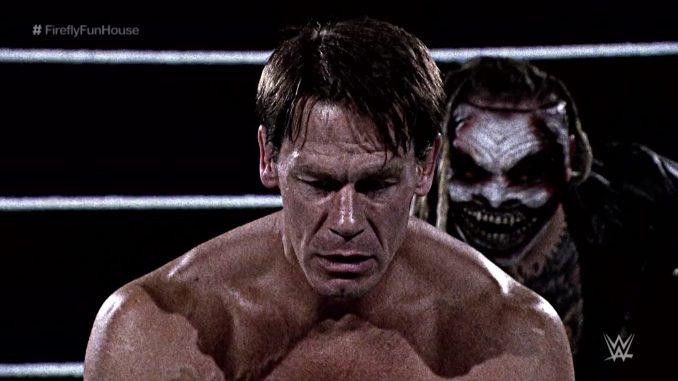 Some content may subconsciously draw from Dostoevsky’s work. Others do it purposefully. Filmmaker Vitaly Sumin creates many modern adaptations of classic literature, specifically works by Dostoevsky. He has spent his career creating engaging films that retell Dostoevsky’s work in a modern context. One of his films Notes from the New World faced a tumultuous production.

During production, the screenwriter, Robert Hurley, disappeared. With the only shooting script in his possession, Hurley caused a halt to production. Undeterred, Sumin and his crew investigated his disappearance. What they discovered was alarming. Thankfully, they documented the events. Currently in postproduction, Dostoevsky Reimagined: The Making of Notes from the New World follows their pursuit for Hurley and their shocking discoveries.

Previous Article Live From St. Petersburg, It’s Dostoyevsky Night Live!
Next Article   A Breakup Movie Dressed in the Clothes of a Folk-Horror Film. Ari Aster’s Midsommar (2019) and a nod to Fyodor Dostoyevsky