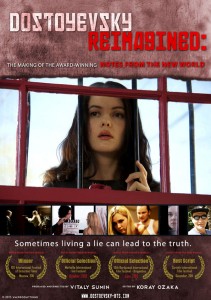 With the BTS, to paraphrase a signature Monty Python title, our aim is to create a documentary that’s “something completely different.” Instead of merely documenting our previous feature, we’d like the BTS to have an artistic life of its own. But, you ask, quite reasonably, “Aren’t we perhaps stretching things a bit?” Didn’t Notes from the New World–which went on to win major awards in a number of international film festivals–say all that needed to be said? To answer that question we need to take a cinematic side trip and visit the works of filmmakers Francis Ford Coppola and Werner Herzog.

Francis Ford Coppola’s Apocalypse Now (1979) and Werner Herzog’s Fitzcarraldo (1982) are studies in obsession. And fittingly, each film required a major degree of obsession on the part of the director just to get made. And both films inspired “making of” documentaries—Hearts of Darkness: A Filmmaker’s Apocalypse (1993) and Burden of Dreams (1982),

respectively   –  which were also studies in obsession, in each case the real-life obsession of the director. In the process, each of these documentaries attained its own stature as a work of art. (As a sidebar, it’s interesting to note that our director/writer/producer, Vitaly Sumin, was a friend of the great actor Klaus Kinski, the star of Fitzcarraldo and other Herzog’s films; Kinski was slated to star in a VM Productions version of Dostoyevsky’s The Idiot; unfortunately, he died before the project could reach the production stage).

We hope our BTS will follow a similar trajectory toward intrinsic artistic validity; at the same time we recognize that there are some key differences. While it could be stated that obsession is one of the themes of Notes from the New World, there’s a broader and deeper search involved in the film’s narrative that derives from the multi-layered nature of Dostoevsky’s literary explorations and the cinematic vision of writer/director Vitaly Sumin. Steven, the young protagonist of Notes from the New World, is a twenty-first century actor posing as the nineteenth century Dostoyevsky. And Steven’s world is contained within the larger world of Bob, his wealthy benefactor who observes Steven’s doings on a remote screen. 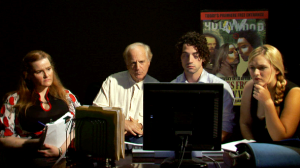 These realities intersect with others in a game of boxes in boxes. And contained in the smallest box at the center of Notes from the New World is an audio-visual tour-de-force that serves as the beating heart of the film–its true heart of darkness, as embodied a compressed, rapid montage that encapsulates the contrasts and paradoxes of Dostoyevsky’s philosophy—and by extension, of life itself.

The title of the montage, “Love-Terrorism,” tells us what to expect. Silent-movie swashbucklers, Eros, romantic love, lovers kissing, street riots, the twin towers exploding… It’s haunting and at first glance appears to be a study in pessimism. But clearly discernable amidst the graphically expressed horrors is an underlying sense of our common humanity. As shocking and disturbing as many of the images are, it’s the lovers’ kisses and the beauty of naked human forms that linger in the mind’s-eye. As Bill Cantos sings in his wonderful song of the same name: “Love wins.”

This is the ultimate message of the montage and the movie in which it’s contained. In encompassing both, we hope and trust that Dostoevsky Reimagined: The Making of Notes from the New World will serve to express and amplify it further.

In the movie Notes From The New World, Bob, Steven’s mentor, provides Steven with the DVD of this clip to play for the visitors.