Good news. Just last week, I received word that our missing screenwriter owns a safety deposit box at a bank in Culver City. Vitaly Sumin contacted me recently with some surprising information. He’s the only other person who is authorized to access Robert Hurley’s safety deposit box. It makes sense… Vitaly (director/producer with VM Productions) trusted Hurley to write the first draft of script for his film Notes from the New World. They had a friendship, and they both admired each other’s passion for Dostoyevsky’s work. 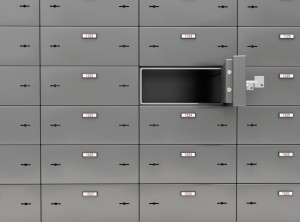 After all the time that has passed, it is indeed strange that Hurley would announce his presence in such a way. There are much easier ways to contact a person. Even so, this unusual dead drop suggests that Hurley is still in danger. Otherwise, he would have contacted Vitaly  directly.

While I awaited Vitaly’s arrival in Los Angeles, I decided to get in touch with Rex Hoss, a private investigator who helped out the pre-production team in the early stages of Hurley’s disappearance. With his contacts and resources, Rex was able to help me pull some photos from the bank’s surveillance feed. We specifically checked the day Hurley purchased the safety deposit box. Unfortunately, we came up short. I didn’t see anyone who looked like Hurley in the lobby.

A few days later, Vitaly arrived in Los Angeles. We met up at the bank in Culver City, and then proceeded to check Hurley’s safety deposit box. What we discovered was surprising — the “missing pages” that were torn from Hurley’s journal…

Natalya showed me the shipping containers. Russian prostitutes – as many as nine or ten were led to believe they were free. Some were used as sacrifice, others as servants.

Natalya was originally supposed to be a sacrifice, but one of the Captains or Brigadiers put her in charge of making the customers happy.

She wanted a life in America, but she trusted the wrong people. She came from those containers, and she was still under their control. She loved me, and I her. But she knew I see only what I want to see. Natalya wanted me to understand. She wanted me to run away and never look back.

I figured I could pay off her debts, but I am losing more money than I make. I should try something different. Maybe roulette.

I think the Brigadier knew what we were up to in San Pedro. He seems to have his eye on Natalya all the time. Yesterday, I caught a glimpse at a scar on his face. Looked like a pig’s tail.

On page four, Hurley’s writing was somewhat convoluted. He mentioned an “end of the world” code that was buried in the text of Fyodor Dostoyevsky’s Notes from Underground. Hurley supposedly discovered this code and wanted to share the secret with Vitaly Sumin in person. However, he never got the chance because the cult was already on to him.

I don’t want to rule anything out, but as of now, we have no way of knowing the legitimacy of this “code”. Based on these newly discovered entries, it seems pretty clear that Hurley was getting too close to the Russian mafia and their secrets. He knew about Dark Onto Light as well as the location of the shipping containers. This new information is all very compelling, and the pages might be the key to finding out what happened to Hurley. But I have my doubts…

First of all, Hurley was not captured by the surveillance cameras at the bank. This could mean that there is someone who has Hurley’s identity. If this is true, why would someone want to pretend to be Hurley? Secondly, it is fairly obvious that the handwriting in Hurley’s journal is slightly different than the handwriting in the new pages. Although one’s handwriting is not as unique as a thumb print, it is usually a characteristic that doesn’t change. So, Hurley may or may not have written those entries.

If not Hurley, then who?